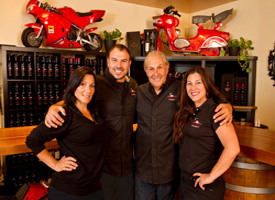 In Temecula Valley Southern California Wine Country, the family that wines together, stays together. At least that’s what it seems like given the number of family owned and operated wineries that populate the region.

What started out as Marcelo Doffo’s retirement project slowly evolved into a full-fledged, family-owned and operated winery, Doffo Winery, known for producing small-lot, hand-crafted reds. Upon his official retirement on January 1, 2016, Marcello turned the business over to his three children to run it. Son Damian serves as acting CEO and winemaker, and daughters Samantha and Brigitte serve as event coordinator and tasting room manager respectively.

“Our family bond has never been stronger, and we all share the same vision and goal, and the direction in which we are heading with our winery,” said Damian. “In all honesty, I wouldn’t have it any other way and I think we all share that same sentiment.”

The Doffo family shares many things, but most importantly, they are unified in their belief that quality winemaking starts in the vineyard. To this end, they hand-plant vines, meticulously prune and even play classical music for their vineyards to “soothe the grapes.” They also share a love of motorcycles. The Winery is home to MotoDoffo, the family’s private collection of over 100 racing and vintage bikes.

The Wilson Family opened Wilson Creek Winery because they all wanted to be together after parents Gerry and Rosie Wilson retired. Originally from Minnesota, the Wilsons had no experience as vintners other than making dandelion and rhubarb wine in their basement in the 1960s. Today, Wilson Creek is one of largest and most widely recognized wineries in Temecula Valley, and still run by family. Bill Wilson is CEO; Mick Wilson is COO; Deanna Wilson works in sales and distribution and Jennifer Wilson works in merchandising. The family can regularly be found on the grounds, meeting customers and working closely with winery staff. All would say Gerry and Rosie are the glue that holds everything together.

Some wineries are a union of not one but two families. Gary Winder started Stage Ranch Farm Management Inc. (parent company of Temecula Valley Winery Management) in the early 1970s. He was joined by Mike Rennie in the 1990s and together they focused on growing their vineyard operations, ultimately founding Leoness Cellars in 2002. Leoness is largely run by their families, including Rebaux and Jesse Steyn, Gary’s daughter and son-in-law. The staff describe the team as “more of a family group” than a traditional collection of employees, which they attribute to their unique family dynamic.

Lorimar Winery is owned by brothers-in-law Lawrie Lipton and Mark Manfield– the name is actually a hybrid of Mark and Lawrie. Lawrie’s daughter and son-in-law couldn’t escape the family business, both working there as well. And, one can’t visit Wiens Family Cellars without running into one of the Wiens– a whopping 19 family members are involved with the winery and brewery. “We are a tight-knit family and have always done things as a group,” said Jeff Wiens, owner and general manager. “So having a family business seemed a natural fit.”

Be sure to visit these and other Temecula Valley Southern California wineries this September, during California Wine Month. For more information, visit www.winemonth.org.