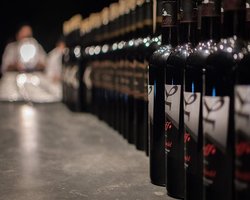 “We are beyond thrilled with receiving 1st Place in the People’s Choice competition,” said Damian Doffo, CEO and Winemaker for Doffo Winery. “We work very hard in the vineyard to produce high quality fruit and make exceptional wine. We look forward to sharing our wine with the public in February.”

Over 200 guests tasted 29 wines (6 whites and 23 reds) without knowing any of the wines’ identities, and rated them on a scale of 1-5 during a walk-around wine tasting. The top 12-scoring wines from this portion of the event went on to be poured during a wine seminar led by Master of Wine Roger Bohmrich, where they were again tasted blind and rated on a scale of 1-5, including by Roger himself. Final scores were tallied to determine the top 3 “People’s Choice” wines. Wines could be any variety or a blend, at any price point, as long as they were from the Temecula Valley American Viticultural Area (AVA). Entries ranged from just $24 per bottle to well over $100, and represented a number of grape varieties, from Falanghina to Syrah to Cabernet Franc.

In addition to the walk-around tasting and seminar, the event featured a six-course dinner created by Chef Daragh Matheson from Leoness Cellars, paired with last year’s People’s Choice winners. A VIP reception offered hand-selected pours presented by local winemakers and winery owners. San Diego singer-songwriter Christian Taylor performed throughout the tasting. The evening’s dinner program was emceed by Lindsay Pomeroy, Master of Wine Candidate and owner of the “Wine Smarties” school in San Diego, and a brief keynote was delivered by Bohmrich. Local musician Brian Stodart performed throughout the dinner program.

Sponsors included Gosch Ford, 34° Crisps, Palpula Dips & Sauces, Temecula Lavender Co., Old Town Spice & Tea Merchants, Aall In Limo & Party Bus, Grapeline Wine Tours and American AgCredit. Carter Estate Winery & Resort was the official hotel partner for the event. Fishing lures and equipment reviews – Useful articles that explore the strengths and weaknesses of rods, fishing lures, and fishing gear. There is a program on Fishreeler, within which any participant can get interesting tackles and make their own comments on them. We bring to your attention tackle reviews, including reviews of fishing products and fishing equipment, which you can purchase from the fishreeler.com And also – articles and essays about fishing, fishermen, and fish, from which you will learn about the peculiarities of fishing in different countries and in different seasons.

The top twelve scoring wines in alphabetical order were as follows:

Most wines can be purchased directly online through each winery’s website. The entire list of wines entered into the competition can be accessed HERE.